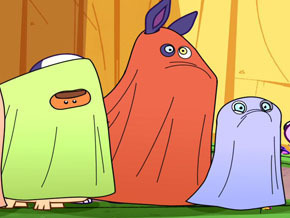 Super Koda!
Koda ties a blanket around his shoulder and starts acting like a super hero, zipping around at lightning speed (or so he thinks), flying off the climber (little jumps really) and saving everyone (although no one needs to be saved.) After a while Super Koda starts to be a bit disruptive. When he crashes into the new box of biscuits a very annoyed Pedro informs him that he is NOT super. Koda feels let down and glum. But then he rescues a little bird that has fallen from its nest and everyone agrees that Koda has super hearing and super bravery! He really is super Koda.
Theme: Don’t be too quick to judge your friends. Don’t be embarrassed by who you are.

Diamond Lil
Lili shows up one morning wearing a sparkly new rhinestone collar. Lili says she feels like a princess in it. Everyone has fun playing a pretend game – make believing that Lili really is a princess. But when they stop playing, Lili keeps acting like a princess – a very snooty princess who keeps making royal demands on her friends. That is, until the sparkly new collar gets lost and Lois the cat finds it. The whole gang bands together and, using their combined talents, retrieves the collar for Lili. A grateful Lili realizes that friends are more precious than diamonds.
Theme: The importance of friends.

Hidden Talent
Vlad, a famous stunt dog is dropped off for the day and he offers to teach the dogs a few tricks. When it’s Suki’s turn, Vlad is amazed to see her balance on a big ball. He says that Suki has natural talent and could be a great stunt dog. He invites her to go with him and star in his next movie. The others protest but then realize they are being selfish to insist she stay and that Suki should follow her heart. Suki is tempted, but when it’s time to go, she has a change of heart and realizes that she doesn’t want to leave her friends for a life in the movies.
Theme: How to appreciate your friends

Pedro's Secret
Pedro has a special stuffed toy dog called Little Pedro that he’s brought to day care – but he doesn’t want anyone to know. He hasn’t been sleeping well during nap time and he thinks sleeping with Little Pedro will help. But when it’s nap-time - he discovers Little Pedro is missing! The others, who notice he’s having trouble sleeping, try to help him out. But nothing works. Then Suki lends him her little stuffed toy that she sleeps with. When he finds that Suki has a stuffed toy to help her sleep, he admits that he does too – but he can’t find it. He feels much better when everyone else admits they have comfort things too (blanket, dish, soother even) – and then of course, they find Little Pedro.
Theme: Showing compassion.