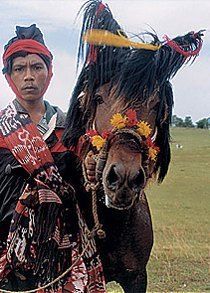 Far from the urban centers of Indonesia, the descendants of the Sumba warriors continue to celebrate a history where horses were sacred and more valuable than the life of a man. Every year the island of Sumba is the centre of the Pasola, a deadly and ritual battle during which dozens of horsemen fight each other to bring peace and a prosperous harvest for the rest of the year.

Sumba has long been associated with violence. For centuries, this island was known for its cannibalism, headhunters and slave trade. Villages would readily wage war against each other. At the dawn of the twentieth century, when peace finally reigned over the island, the Pasola became the only way to settle scores.

For Nellys’ family, this Pasola is meaningful: it will be the first one for Nelly and the last one for his uncle.