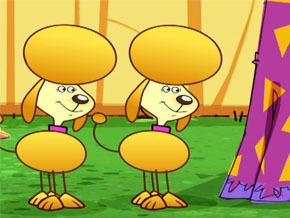 Star Trouble
A movie star poodle named Bella is dropped off for the day. She’s very nice and everyone likes her a lot. She looks a lot like Lili and at first Lili is thrilled. But she quickly becomes jealous of all the attention the others pay to Bella. But she soon discovers that Bella is jealous of her! Bella admits she wishes she could go to Doggy Day School every day and have all the fun and friends that Lili has.
Theme: Jealousy and envy

A Sorry Story
Lucas, the over active puppy accidentally pulls Lili tail, and then jumps on her by mistake. After the third mishap, Lili refuses to accept his apology. Poor Lucas feels terrible but nothing will change Lili’s mind. It’s only when she almost knocks over Fish’s bowl that she realizes how bad it feels if someone won’t accept an apology.
Theme: Accepting apologies

Detective Dogs
When Pedro’s liver treats go missing the dogs decide to become detectives to figure out who took it. They follow the clues and discover a mother bird has taken some of the treats to feed her new babies.

Substitute Rosie
The dogs arrive at the school to discover that Rosie is sick and a substitute named Aanjay is going to look after them. At first they’re all unhappy and have a hard time accepting her. But before too long they learn that a new person brings new ideas and games and they end up spending a wonderful day together.
Theme: A new person can be fun too.