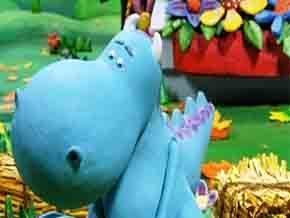 Star-Gazing Dragon: One Day Dragon notices Mailmouse is very sleepy. She explains that she stayed up long past her bedtime to see a comet. Dragon decides that he’d like to see something as exciting as a comet, too. “I’m sure I can stay up past my bedtime!” That night Dragon tries to stay awake. He sits down on his bed so he won’t get too tired – but sitting down makes him sleepy. He decides to count the hearts on his blanket to keep him awake. But counting things what lots of folks do when they want to fall asleep, and soon… zzzzzzz. The next night Dragon decides he’ll have to be more clever – so he hides his bed. Then, he hides alarm clocks all over the house, all set to go off at his bedtime – so when his bedtime arrives he'll be so busy finding all the ringing alarm clocks he won't have time to get sleepy and miss the comet. And the ringing alarm clocks do keep Dragon up past his bedtime, except… he gets so tuckered out running around and finding all the clocks… zzzzzzz. The third night Dragon decides to wait outside, where there aren’t things like a warm bed or hidden alarm clocks to make him sleepy. He starts to count the stars, then remembers counting things is what made him sleepy the first night. He hears a cricket, and goes looking for it, then remembers looking for things is what made him sleepy the second night. Instead, he decides to just sit there and wait, and soon… zzzzzzzzz. When Dragon wakes up the next morning he realizes: He always gets sleepy when he stays up past his bedtime, because it’s his bed time. Then he comes up with a clever idea. He’ll make his new bedtime the middle of the afternoon – that way, when he wakes up – it will be the middle of the night, and he’ll be able to see the comet! So, right after lunch, Dragon brushes his teeth, has a good stretch, and goes to bed. And because it’s his new bedtime, he falls right asleep. Then, right around his old bedtime, Dragon wakes up, rested and all ready to go see the comet, because he's had a good long snooze. He hurries outside, and there it is in the sky – the comet - a beautiful sight. Dragon is very happy he tricked himself into staying up past his bedtime to see the comet and heads back inside... except... now he just has one small problem. It’s his real bedtime... but he isn't at all sleepy. Luckily, he now knows lots of ways to make himself fall asleep... and starts to count the hearts on his blanket…. Zzzzzzzzzzz.

Dragons Fall Fair: It’s the first day of fall. Ostrich, Mailmouse and Alligator drop by Dragon’s place with tasty autumn treats: a basket of tomatoes, a jar of yam soup, and a yummy apple pie. When Beaver wanders by and spots all the goodies he says it looks like Dragon’s having a fall fair. “What’s a fall fair?” Beaver explains it’s like a big outdoor party – to celebrate the end of the growing season. “There’s scarecrow making contests, hay rides, apple bitin' games... sometimes they even have a fun house, yup." Dragon loves the idea, and wants to put on one of his own, except… “How will I have my own fall fair if I've never even been to a fall fair?" Beaver explains the first thing he needs is some hay. Dragon drives out to the country and gets some hay bales, sun flowers and corn stalks, and carefully decorates his yard. “Now it really looks like summer is over!” Dragon invites over his friends. "Welcome to my Fall fair! First, let's go on a hay ride!" Dragon hops on a hay bale… but it doesn’t seem like much fun. Alligator tries riding the bale, and he doesn’t find it very exciting, either. And even though Ostrich tries really hard, she can’t get the hay to go anywhere. Then Beaver arrives and explains that the hay is supposed to be on a cart, pulled by a horse. The friends don’t have a cart, or a horse… but they do have Dragon, and a wagon – so the hay ride works out just fine! Next, Dragon and his friends make scarecrows… except, they don’t know what a scarecrow is, so they end up making ‘scary crows’ – which is even more fun. Next, it’s time for the apple biting contest. Because he doesn’t have any apples, Dragon decides they’ll play the game with a pumpkin… except… it’s very hard to bite a pumpkin. Dragon and his pals have a pumpkin rolling contest instead. After the contest, Dragon turns his home into a fun-house. He takes out all his furniture and puts his mattress and sofa cushions on the floor, so he and his friends can have lots of fun bouncing away. Then, they have a big fall feast. They’re all having such fun, they don't want their fall fair to end. "Is there anything else we can do?" “Well... there's one other thing... sometimes at a fall fair, after dinner, there's square dancing, yup..." "...Square dancing?" Beaver starts clapping his hands. "Pretty simple... Just clap your hands and talk real fast, yup. Like this." Soon, Dragon is calling a great square dance and everyone’s having a wonderful time. Beaver has to admit Dragon's fall fair is nothing like the other fall fairs he's been to - and that's what makes it better!