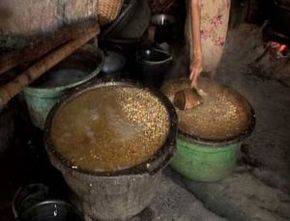 The common soya bean has been around for more than five thousand years. Originally cultivated in China, the soya bean now feeds millions of people around the world. But it is in the streets of Asia, that the soya bean has under gone its most diversified transformation. Its multitude of forms has been developed to suit the tastes of the locals.

It is also an excellent source of nutrition, as well as livelihood? What is the secret that has enabled it to be a much-loved staple in the Asian diet? In The Soya StoryY Asia, we unravel its astonishing versatility.

In Indonesia, we see how soya beans are fermented to become tempe – a chunky, mouldy ingredient in many interesting dishes, snacks and even cakes. In Taiwan, we learn how soya beans are first made into tofu, then marinated in a brine to become “stinky tofu” – a delicacy not only known for its taste but for its smell. And in the Philippines, we watch how soya beans are processed and solidified into taho – a sweet, silken bean curd that has become a favourite breakfast treat.

This simple bean has been able to feed many – and it has also lifted others out of hunger. Through the eyes of three taho vendors in Manila, we hear how the humble bean has sustained their lives and through their stories we learn of its astonishing importance to the Asian culture.