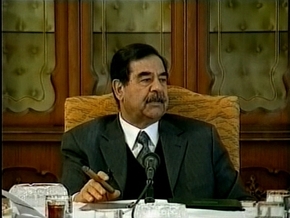 When the bloody regime of Saddam suddenly ended, United States seemed the great victors. But one year later, we are still wondering what happened to the Sunnite Triangle? Where are Saddam's secret service men? Who are the new Islamic fighters that have been making American soldiers' lives so difficult in Iraq?

This film is a look into the treacherous yet unknown territory of the Sunnite Triangle. This area, in the centre of Iraq, inhabited by 5 million people, united by the same religion, Islam and a privileged people since the beginning of Saddam's rule.

Antonia Rados' inquiry into this secretive and disturbing world allows us to see the day to day relationship of the American liberators and the Iraqi population that considers them invaders. In this new war, who can the Americans trust, who are their enemies? Has Saddam had his last say?