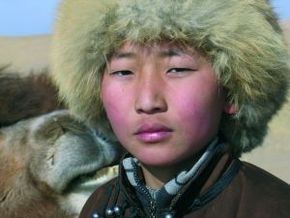 Quizilol: In the snow-covered plains of northern Mongolia, the young Quizilol must show he is capable of raising a herd of reindeer by himself to prove his manhood. His family gives him a young stallion to start off. During a blizzard, the stallion escapes into the spirit dwelling mountains. The young man can only count on himself to capture the animal. If he succeeds, he will become a man.

Zayd: He is nine years old. He is a member of the Bdoul tribe, the last remaining Bedouins who still live in one of the most illustrious cities of the world, Petra, in Jordan. Being a Bedouin starts with learning to train and mount a camel. Zayd’s challenge will be to set off for Mount Aaron, Petra's highest peak. If he succeeds to the top, Zed will be a true camel-driver, and will thus participate in the safeguarding of the Bedouin tradition of Petra and Wadi Rum.