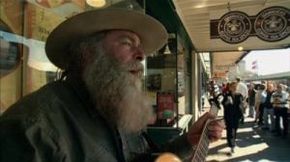 THE PERFECT CUP, heralds what some coffee experts have called "the romantic age of coffee". North Americans re-discover what their European counterparts have known all along; coffee is better when it's quality coffee, and the best place to find it is in the relaxed and friendly atmosphere of the café.

A quirky collection of vagabond hippies emerge from the 70’s to create mega-chains like Starbuck's and Second Cup in the 80’s. Coffee becomes the first global industry to experiment with Fair Trade practices (defined as coffee grown by co-operatives without the use of wage labourers and with respect for the environment) and a new breed of co-operative farmer is born in Central America.

Activists wake-up to the fact that a pound of designer coffee in North America represents a full week's wage to coffee growers in the producing countries. They organize under the banner of "Fair Trade" and start to pressure the mega-chains to share their new wealth with producing countries.

As we enter the new millennium, the fair trade coffee bean remains a small part of the overall coffee market. But, with consumer consciousness on the rise, coffee represents the best hope for modeling a new relationship between the "have" and "have not" hemispheres. And in Cyber-cafés around the world, enlightened coffee drinkers and activists are making sure that the fair trade model continues to grow.