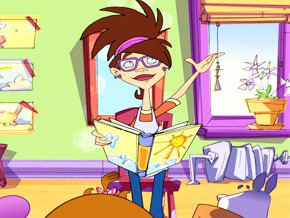 Oodles for Poodles
Two poodles are dropped off at the daycare for the day. They look just like Lili except they’re a different colour (both are yellow). Lili is thrilled to have them around and makes a big deal of how similar they are. But much to the dismay of the others, she soon only wants to play with the two drop-ins. The others understand, until Lili proclaims a poodle’s only club and they begin to feel left out. But then two yellow poodles make their own clubhouse (for yellow poodles only). Now Lili is upset – she quickly realizes it doesn’t feel very good to be left out. She apologizes to her old friends and they invite her to join their game. It’s a game EVERYONE can play. It’s so much fun that soon even the two drop ins want to join them.
Theme: Including others in your games

Food for Thought
Daisy, an Afghan drops in for the day. And brings a special snack – curry biscuits. The others don’t mind it, but Lucas and Pedro think the snack smells funny. They laugh about it and call it stinky. Daisy overhears and her feelings are hurt. The others tell Lucas and Pedro it isn’t very nice to make fun of someone because their food is different and Lucas and Pedro apologize. Everyone tries the new snack and likes them except Pedro, who’s convinced he won’t like them. But when he inadvertently tastes one, he finds he loves them. In fact, he’s so wild for them he tries to convince Daisy to bring in more the next time she drops in for the day.
Theme: Kindness to others and everyone is special in their own way

Bath Time
Lucas gets dirty playing in the mud but doesn’t want to take a bath. He says he hates getting wet! There’s a small puddle in the back yard (made by the hose when Rosie filled the tub). Now that’s the kind of bath he likes – a mud bath. He jumps in, which makes him dirtier than ever, but he still won’t take a bath. Soon he gets dirt on Pedro’s painting, drips mud on Lili’s dress up hat and all over the floor. It’s only when he inadvertently gets wet that Lucas realizes that being wet isn’t so bad after all! In fact, it’s fun!
Theme: Trying new things can be fun

Koda and the Three Bears
After Rosie finishes reading the others the story of “Goldilocks and the Three Bears” Koda wants to put on a play of Goldilocks. They all start practicing their play, but Koda quickly becomes very bossy, and insists that he get all the good parts. He wants to be Goldilocks and the bears! After a while, no one wants to be in the play with him anymore. Koda stubbornly persists at playing on his own but soon finds that it isn’t any fun. He realizes that he had been hogging all the fun. To entice the others into playing with him again he hides their snacks and leads the very excited and hungry ‘four bears’ on an intriguing reinvention of the ‘Goldilocks’ story, following clues and crumbs to find out what’s happened to their missing snacks.
Theme: Learning to cooperate and being considerate of other people’s feelings