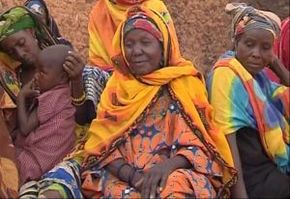 Niger, on the fringes of the Sahel, is in the frontline against an advancing desert. Villages such as Limandi, in the Diffa Department, have been abandoned to the dunes. It is the classic image of desertification. And yet, despite a major drought, there is strong evidence that some villagers are reversing the trend and re-greening their farms and pastures.

Fifteen years ago, in the Maradi department, the village of Dan Saga seemed to be about to suffer the same fate until a group of determined women started planting trees to protect their fields from the desert and thieves intent on felling them.

In this film we are in the company of two Niger experts sharing the same name, but very far from sharing the same views on what can be done to keep the villages alive. At Koloma Baba, in the Tahoua department, widows and divorced women – a highly vulnerable group – have used traditional conservation systems imported from Burkino Faso to transform rocky and worthless land into productive fields, thereby improving both their food security and income.

The Mahamans are at odds about the long term viability of the approach imported from the neighbouring country. Could land rehabilitation be a solution for repudiated women in a polygamous, male dominated society? And how much of that land would the daughters inherit in a country where inheritance laws favour the male offspring?