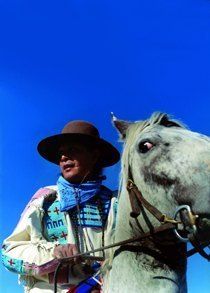 With the introduction of horses in America, the Nez Perce Indians became gifted breeders, with the appaloosas, their famous spotted mounts.

In 1877, the American army defeated the Nez Perce and decided to slaughter the appaloosas, which they considered a threat because of their sturdiness and speed.

To commemorate this tragedy, every year, the Nez Perce hold an "empty saddle" ceremony. This is their way to hold on to their way of life and their identity.

Despite the modern surroundings of American cities, Carl Ray is keen to revive the ancient equestrian traditions of the tribe.