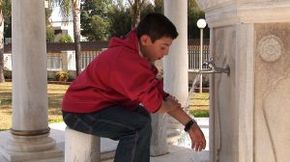 Many nations are undergoing an increase in cultural diversity and learning to live together in a multicultural society is one of the major challenges of modern society. This series is designed to give an unbiased view of the community life of six world religions to children at the Elementary and Intermediate levels. Each program within this series follows a child and their family, giving an insight into the role of religion, tradition and rituals in their daily lives and the communities in which they live.

(6 x 6 min.)
1. I'm a Hindu:
An eleven-year-old boy in London, England, celebrates Diwali at home with his family and participates in festivities at the largest Hindu temple in Europe.
2. I'm a Buddhist:
A young girl meditates in a Buddhist temple in Toronto, Canada, and participates in a meditation group with her family and friends.
3. I'm a Jew:
An eleven-year-old boy from New York gives us insight into how he and his family celebrates the Shabbat, Rosh Hashanah and Hanukkah. He also attends a Bar and Bat Mitzvah ceremony.
4. I'm a Christian:
A Christian girl who lives in Sicily, Italy, attends a Catholic mass on Mount Etna and celebrates Christmass with her family. The Vatican and the pope are also featured.
5. I'm a Muslim:
An eleven-year-old Muslim boy observes the fast, learns to recite passages from the Qur'an and takes part in a ritual prayer a mosque in Sydney, Australia.
6. I'm a Bah'ai:
A German girl participates in the life of her local Bahá'í community and enjoys a summer festival with her family and friends on the grounds of the House of Worship, near Frankfurt.