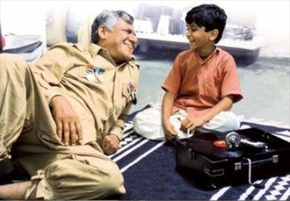 Upon the death of his mother, Joseph, a young ten year old boy, is sent by his father to a boarding school. Saddened, he leaves Magan, his best friend, and the village of his childhood to lead a new life. His new home is run by strict but caring Catholic missionnaries. Little by little, but now without incident, Joseph learns to love and be loved by the people at the school and his new family. It is in this boarding house on the shores of the Indian Ocean that, during recess, he will make an encounter that will change his life forever. That of Sandu, a teenager living in extreme poverty. For the very first time Joseph witnesses real misery. Revolted by the injustice, the child will decide to help his new-found friend. Everyday, little Joseph will ''borrow'' bread from the school's kitchen and give it to Sandu and his impoverished family. Until the day he gets caught red-handed... Twenty years later Joseph and Sandu meet by coincidence in a faraway train station. Joseph has become a notorius writer and Sandu, an engine driver. This time it is Sandu who offrs a piece of bread to Joseph.