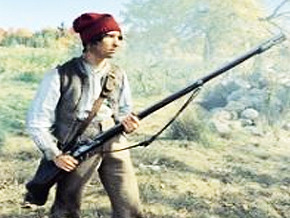 In the fall of 1838, François-Xavier Bouchard exiled in the United States since the first failed Patriotic uprising of 1837, returned to Canada with a new hope: to finally deliver his country from the monarchist authority and establish a republican democracy in Lower Canada with weapons promised by the Americans. The promised weapons did not arrive and pursued by the British Army, Francis Xavier, his fellow soldiers and their commander, Chevalier De Lorimier flee. Francis Xavier is helped by the Neveux. There he meets their daughter Marguerite and before leaving with his companions, Francis Xavier promises her that he will return but they are all captured just before crossing the border into the United States.

An important part of Canadian history, this full-length feature film is based on authentic diary entries including those of François-Xavier Prieur.