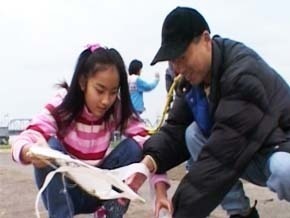 Kotone, eleven years old, gets out of school every day at four o’clock and goes home with her friends. Before doing their homework, the three girls like to go to a theme park but their merry-go-rounds are a bit shaky and Kotone prefers more calm activities. The parents of Kotone suggest she make a traditional wooden toy, a kite. But it is not easy for a young girl and she will need help. Kotone loves calligraphy. She learns to draw a kanji, a symbol or letter to write on the kite her parents have given her. Like many Japanese children, Kotone is also learning martial arts and after her class, she goes to a café to read mangas. Kotone is a very active little Japanese girl and one of her favorite pastimes is the piano. She plays very well even though she is worried about her exam at the end of the year. But her biggest worry at the moment is the kite. Kotone loves artistic activities. She wants to learn origami. A little paper-folding lesson will allow Kotone to offer her cousin a gift for the Shin shi gosan festival. This festival is also the time to try out her new kite. She hopes it will fly!