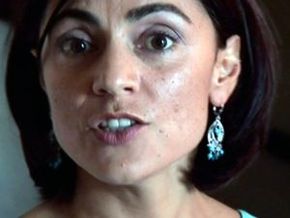 After the 9/11, Sibel Edmonds, a Turkish-American was hired by the FBI as a translator because of her knowledge of Middle Eastern languages.

Only a few months into the job, one of her colleagues who had worked for an organization under FBI surveillance paid her a troubling visit at home when he offered her the opportunity to cross-over to the other side as a spy for a foreign power!

Even though she followed the chain of command to report her findings to her superiors… Edmonds was retaliated against and fired from the FBI, the beginning of a nightmare for the translator who already knew too much. She was now a whistleblower!

For four years now, she has been fighting the most reckless and powerful officials in the U.S. government. Due to “State Secret Privilege”, Sibel has lost her freedom of speech, hence the capacity to expose the illegal activities that she discovered. But when the government took her on, they made the wrong woman mad.

This is the riveting story of an inconvenient patriot, a proud citizen in a truth-seeking America.