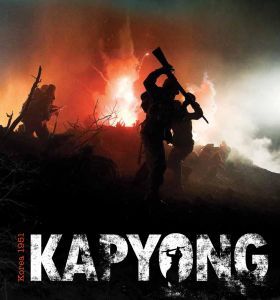 Kapyong is the story of how a small band of Australians, Canadians and New Zealanders, in Korea, gave up their Anzac Day barbecue to stop the Seoul-bound Chinese Army in its tracks.

On April 24, 1951, following a route of the South Korean army, the Chinese People Volunteer Army pursued their enemy to the lines of Australian and Canadian troops still digging fall-back defences, thirty-nine kilometres to the rear.

Here, sometimes at the length of a bayonet, often in total darkness, individual was pitted against individual in a struggle between a superpower and a cluster of other nations from across the world. They fought for a valley, the ancient and traditional invasion route to Seoul. If it fell the southern capital and the war, was lost.

The United Nations troops had the military advantage of the high ground and artillery support: the Chinese relied entirely on vastly superior numbers. As a result, young men from both sides found a battle which was very close and very personal.

The Battle of Kapyong became the turning point of China’s Fifth Offensive in that Korea spring. The aim of the offensive was to finally drive the foreign troops out of South Korea and into the sea. What happened instead, changed the history of the Korean War. The Chinese were denied victory and forced back into negotiations.

Had they succeeded, another crushing defeat for the US could have triggered events that led to a nuclear holocaust in Asia - and World War Three.