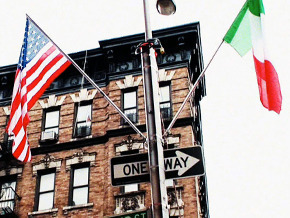 Something is pulling at John Mezzogiorno. Voices from the past are calling him back to tell their story, and in doing so to tell his own. Immigrant Son follows John's attempt as a fourth generation American to make sense of his past, the travails of his ancestors who came to the New World, and ultimately America itself.

From a traffic jam on the Cross Bronx Expressway, to idyllic sloping hills and lush pastures of Central Italy, Immigrant Son takes us on a journey through time. Pasted and spliced together with over a century of sound and image, and motivated by a real story to tell, it is perhaps best suited as a dialogue starter on the question of what it means to be American.

After its World Premiere at the New York International Film Festival, where it won the Best Documentary Award, Immigrant Son has gone on to garner awards and win praise domestically and abroad from both critics and scholars alike. Recent showings at the Italian Cultural Institute London, and academic screenings at the University of California, Loyola University Chicago and the State University of New York lend credence to the film's educational gravitas and historical significance.

"One of the best films on immigration in years." - J. Davies, Independent FIlm Quaterly