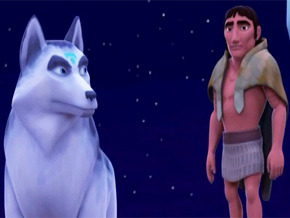 Howl at the Moon

The people in the village are tired because the wolves howl all night, so the men head off into the woods to flush them out. Wina chases a pair of wolves to a high shelf of rock but he decides to lower his spear rather than harm them. That night he becomes lost in a sudden winter storm and the people fear he has perished, but he returns the next day covered with a warm deer fur, rested and fed. He explains that he was cared for by two shadowy strangers in a cave, who revealed themselves as the wolves from the hunt who decided to show him mercy as he had done for them. They tell him that they only cry out in the night to tell the people of the village that all is well. Wina announces that he has decided to be of the wolf clan, and to wear the symbol of the wolf and build them totems.