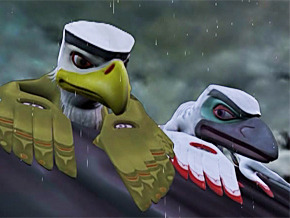 How Raven Stole the Sun

Frog tells Raven about an old man who keeps the light of the world in a box in his hut by the river. Curious, Raven transforms himself into a spruce needle that is swallowed by the old man’s daughter and he is reborn as a Raven-child. Using all his powers of persuasion and the odd temper tantrum, he persuades the old man to open the box and light is released into the world, awakening the plants and animals. When Raven assumes his true form to escape through the smoke hole, it blackens his feathers.

How Raven Stole the Sun