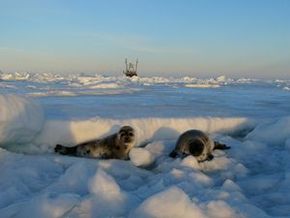 The Hidden Faces of the Seal Hunt

This documentary is about a controversial subject that, even after four decades, still attracts considerable world attention every year, starring Canada as the villain among civilized countries. Seal hunting has been the chosen cause of animal rights groups since the 1960’s. Along with Paul Watson or Brian Davies and beginning with Brigitte Bardot, many stars have also expressed their opinions on the question.

On the other side of this ongoing war, lies another reality, another point of view, one that has not been really considered in all its dimensions before. This film is about those who risk their life on ships that look fragile as toys in an infinity of ice floes. For the first time ever, the seal hunters of the Magdalen Islands speak their minds in front of the camera and share the realities that are theirs.

Their perspective raises questions on the environmental impact, as well as political, economical and moral considerations. Many experts, some internationally recognized and respected, bring their knowledge and thoughts to the film.

THE HIDDEN FACES OF THE SEAL HUNT gives nuance and shading to this controversial topic and as in any other war no side is totally black, nor white.

Hidden Faces of the Seal Hunt