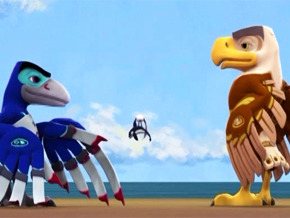 The first people build Eagle a totem because he catches so much fish for them. Raven becomes jealous, and decides to try and win all the fish in the village for himself. He makes up a story of a mystery bird that he has seen catching huge fish from the ocean. Eagle boasts he can catch the biggest fish, and so Raven snares him into a fishing contest. Secretly, he bets on Eagle and plans to throw the contest, dressing up in a silly costume as the mystery bird. Raven leaps down and hits a rock, losing his costume and falling into the water, but is saved when the real mystery bird, the Kulos appears.