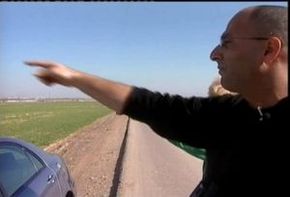 During a ceremony on December 1st, 2003, the Geneva Initiative is launched and the whole world wants to believe - once again - that peace is at hand in the Middle East. After two and a half years of secret negotiations, a group of Israelis and Palestinians have come up with a «global and definitive» solution to the conflict - the echo in the media spans the globe.

The film starts after this ceremony, following the adventure of three Israelis and three Palestinians who signed the initiative and who decided - each for their own reasons - to fight for peace in the region. They are pragmatic and are masters in the art of negotiation. The word "peace" sounds different coming from each of them. It's a battle against their own family, friends or parties.

But soon, further obstacles are placed in their way: the continuing construction of the Wall and Sharon's disengagement plan in Gaza which threatens to torpedo the Initiative. Each camp is in fact a prisoner of his own public opinion. The Geneva Initiative is flagging, but the six signatorie battle on. For them, despite their differences, ''peace is a state of mind. Not a piece of paper''.