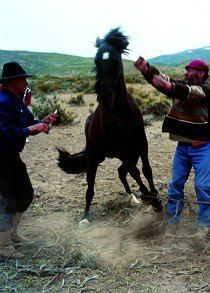 The Gauchos of Patagonia - Argentina

Proud and relentless horsemen, the Gauchos encompass the history and mystique of Argentina. They are the symbol of rebellion, courage and freedom in a land colonized by the Spanish. They are totally dependent on their horses. Equestrian tradition has been handed down from father to son for 400 years.

However, the Gauchos of Patagonia are the forgotten ones of Argentina. They are isolated in a hostile environment so they can only depend on themselves, their horses and their neighbors. Under such conditions, the concept of solidarity takes on a whole different meaning.

During the summer, they herd the goats to the mountain’s pastures. It’s hard work and keeps them away from the family for several months. For Miko to convince his father to bring him along would mean he is now a real gaucho.