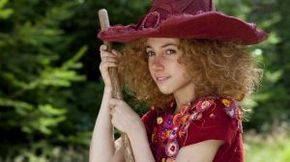 A great adventure sometimes hatches from the smallest egg, as wizard Quark finds out when he finds an egg in the Witch’s Wood. This egg produces not a bird, but a little girl, a mini-witch, who he names Fuchsia.

Fuchsia wants to learn to do magic just like her father, and is pleased as punch when she is allowed to go to witch’s school. Flying along on her brush (she is still too small for a real witch’s broomstick), Fuchsia causes havoc in the Witch’s Wood, and every now and then worries the life out of her father mainly because Fuchsia is very curious about the “human” world a world Quark wants nothing to do with. Quark believes that “People Are Dangerous”. But when Fuchsia sees a boy – Tommy – in the woods, her curiosity gets the better of her. She forgets Quark’s well-meaning warnings and goes to see Tommy in the “human’s” town. There she finds out that Tommy’s uncle, Roger, wants to tear down the Witch’s Wood to build a motorway, there’s only one thing to do. Together they have to save the Witch’s Wood!