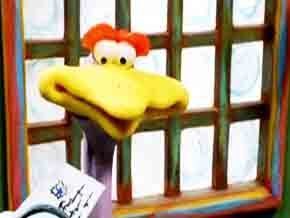 Dragon Surprises Ostrich: Dragon, Alligator, Beaver and Mailmouse want to throw a surprise party for Ostrich – but the tricky part will be getting all the things they need from her store without her figuring out what they’re up to. So instead of buying a cake and hats, they buy the ingredients and materials to make their own. To be sure Ostrich doesn’t catch on, they take turns buying just a few things at a time - Eggs and paint… Butter and balloons… Flour, paper and rubber bands – and concoct clever stories about what they need those things for. Back at Dragon’s place they bake the cake, make the hats, and inflate the balloons. Then they realize they have to find a way to get all those things inside Ostrich’s store without her guessing what they’re up to. First, Mailmouse tries sneaking into the store by hiding inside a big box – but finding your way around with a big box on top of you is trickier than it sounds. The friends decide they’re just going to have to get Ostrich to leave her store so they can sneak the birthday goodies inside. Alligator asks Ostrich to ‘rescue’ him while Beaver scoots inside with the cake – but Beaver has to hide inside the store when Ostrich quickly returns. Mailmouse asks Ostrich to come out and reach something high in a tree, while Alligator hurries in with the hats – and now Alligator has to hide! Dragon asks Ostrich to come outside so he can show her something (although he doesn’t really have anything for her), while Mailmouse dashes into the store with the balloons. Ostrich asks what Dragon wants her to see, and Dragon suddenly realizes he does have something: he leads her back into the store, where Alligator, Beaver, Mailmouse and Dragon all shout “Surprise!” The friends have a wonderful party together and the best part is, it really was a surprise!

Cat's Shady Shelter: It’s a very hot, sunny day and Cat is looking for some shade. She tries hunkering down under a bush, but the branches are prickly and she doesn’t like lying in the dirt. Next she tries a shady spot under Dragon’s car, but it’s a little too greasy and smells funny, too. Dragon asks Beaver to build Cat a shady shelter, but Beaver says it’s too hot to be doing any work! Dragon decides to do it himself – and then quickly realizes building a shelter with a roof and walls will take too long. Meanwhile Cat tries sitting in the shade of a tree – but the birds are too chirpy and a squirrel keeps dropping acorns on her head. Dragon decides he’ll make Cat her very own tree – and glues some sticks and paper leaves to his broom. His makeshift tree doesn’t make much shade, though, and he doesn’t have a bigger broom, so Dragon realizes he’s going to have to be more clever. He quickly puts together a shelter using pizza boxes, but when Cat tries it out it falls apart – and now she smells like tomatoes and cheese! Mailmouse suggests getting Cat to wear a hat, but Cat doesn’t want to wear a hat (what self-respecting cat would?) Dragon realizes clouds are good at blocking the sun, so he holds a towel in the air to create his own little cloud. Cat likes this shady spot, but Dragon’s arms quickly get tired. Dragon thinks about how much simpler it is when the sky is cloudy. You don't have to worry about looking for shade, and "...If it starts to rain, you just pop open your umbrella!" And then he realizes. "If an umbrella can keep the rain off you... it can keep the sun off you, too!" Dragon opens up his umbrella and props it up over Cat – and now Cat has a nice cozy shady spot. He’s a very clever Dragon!