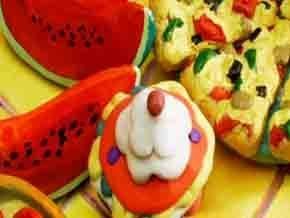 Dragon's Treasure Hunt: One day Dragon finishes playing with his soccer ball and puts it away in a very safe place. It’s such a safe place that a few days later when he wants to play with it again, it takes him several tries to find it. Dragon has so much fun searching for the ball he decides he should try making everything in his house harder to find. He hides lots and lots of things, so just about everywhere he looks, he finds something!
Later, Dragon goes searching in his yard, searching for things he’s hidden there. Mailmouse arrives and asks him if he’s on a treasure hunt . Dragon isn’t sure. Mailmouse explains a treasure hunt’s where someone hides a treasure and draws a special map, and others go looking for the treasure using that map. Dragon’s very excited by the idea, and Mailmouse happily draws him his very own treasure map – a map that will lead him to the best treasure ever. Dragon grabs his shovel and his wagon, and starts following the very elaborate map. It takes him all around his garden… down the road… past Alligator’s… past Beaver’s… past Ostrich’s. His friends are all very curious to see what special treasure Dragon’s going to find and follow him as he follows the map -- right back to his house! Dragon’s sure the treasure can’t be there, since he’d already looked all around his yard. Mailmouse smiles and says, look again. And then Dragon realizes. His friends are the treasure!

Dragon's Picnic: One lovely summer’s day Dragon and his pals are looking forward to having a great picnic. Dragon’s excited about eating tasty treats. Alligator can’t wait to kick a soccer ball around. Ostrich is eager to fly a kite. Mailmouse has been day-dreaming about the fun she’s going to have playing badminton and Beaver can’t wait to hop into a hammock for a nice nap. The friends head to their picnic spot… and discover they all thought someone else was going to bring a ball, a kite, a racket or the hammock. They’re wondering what to do when Dragon declares, “We’ll do things that don’t need things!” First they have a bird calling contest, but of course since Ostrich is a bird, when it’s her turns she moos like a cow – and a cow moos back! Her friends are very impressed - who knew she could moo! Next, the friends play warmer-cooler; patty cake; hop-scotch; X’s and O’s; and even “Beaver says.” Finally, Dragon and his pals (except Beaver, of course) run around for no apparent reason, getting tuckered out and working up an appetite. They’re all ready to sit down and have a nice big picnic feast... except... Not only have they forgotten to bring any games and toys - nobody brought any food! "It's not a picnic without food!" So they all go back to Dragon's for a tasty lunch. Then they agree - next time they go on a picnic, they'll make sure they decide who brings what, first!