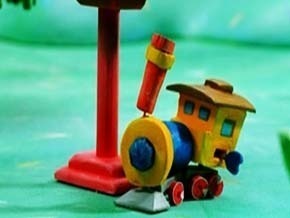 Dragon buys a new toy train . He loves watching the train go round and round in circles... but after a while Dragon get squite dizzy and decides the train should be allowed to do more than just go around and around. He starts to train his train and soon he's letting it run freely around the house - until it accidentally scoots right out the door! Luckily Ostrich is there to save Train. Finally, once the Train has learned how to play nicely in the house and how to play in the yard, Dragon knows his Train is ready to travel the world. The Train goes exploring for a little while and then it comes back, next time it goes away its gone a little longer...but the Train always comes back. Soon the Train has a regular route just like the big trains and Dragon knows every morning at exactly ten his Train will chug up and stop to say hello. It 's the best toy Dragon ever had.