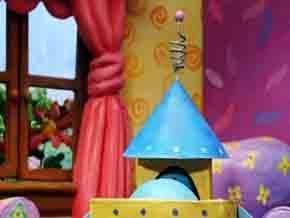 Dragon's Rainy Day Fun: It’s a very rainy day and Dragon is stuck inside. He’s not too disappointed, though – he decides he’ll just find ways to entertain himself indoors. First, all the wet rain makes him think about what it must be like to be a sailor – and Dragon happily pretends his wagon is a ship and he’s sailing the high seas. He spots a whale (Cat) and declares his sofa to be a newly discovered island. Next, Dragon wonders what it would be like to be a diver under the rolling seas. He makes a mask out of tinfoil, flippers out of paper and an air-tank out of a pillow. He has a great time exploring underwater and even says hello to a catfish (Cat). After ‘drying off,’ Dragon sets his sights as high as can be – and decides he’ll be an astronaut visiting the moon. He makes a spaceship out of a cardboard box and blasts off. He has a wonderful time walking in reduced gravity, and says hello to The Man In The Moon - who, he discovers, is actually a cat! Next, Dragon thinks about the weather outside. He realizes on rainy days, instead of walking, it's always better to take the bus. So Dragon decides it’s time to be a bus driver. He wears a special bus-driver’s hat, gives rides to his passenger (Cat) and even sings bus-driver songs. Then, he notices the rain has stopped. It’s nice and sunny - he can go outside. But he’s having too much fun inside. He’ll go out and play… later.

Dragon Does Nice Things: One day Dragon’s all set to go outside and play with his wagon, and remembers it has a wobbly wheel. He heads out with his screwdriver to repair the wheel – and discovers someone’s already fixed it! Dragon feels very happy that someone secretly did such a nice thing for him, and wants to secretly do that someone a nice thing in return… but because he doesn’t know who did it, he decides to do something secretly nice for everyone. First, he secretly slips his wagon under Mailmouse’s heavy bag, to make it easier for her to pull. Then, he secretly smoothes Alligator’s sandbox (and then has to point out to Alligator what someone’s secretly done – since doing something nice for someone isn’t as much fun when they don’t even notice it!) Next, Dragon decides to secretly pick up all the sticks scattered about Beaver’s yard. Except, Beaver had just spent the morning scattering them about on purpose, to dry them off. Dragon secretly re-scatters them. Beaver’s confused… but happy. Finally, Dragon carefully tips over one of his potted plants, to give Ostrich something to rescue – because she loves coming to the rescue! Only problem is, Mailmouse comes by and rights the plant, wanting to do something secretly nice since someone had done something secretly nice for her. Dragon tips over the plant again. This time Beaver comes by and stands it up – being secretly nice! Dragon again tips over the plant, and now it’s Alligator’s turn to secretly set it upright. Finally, Dragon tips over the plant one last time and Ostrich spots it - delighted to come to the rescue.