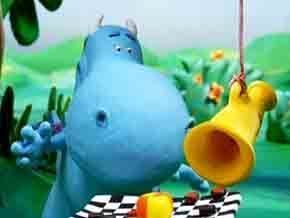 Dragon's Package: One Day Mailmouse delivers a package to Dragon. He’s about to open it when she points out that it says right on the package, ‘do not open until your birthday’ – which is two whole days away. To prevent himself from peeking, Dragon hides the package in his closet… but then he worries he might forget the package is there, so he very cleverly puts it in his wagon and tethers the wagon to his waist. This turns out to be a pretty awkward arrangement, so Dragon places the package in the corner, instead. He really really wants to know what’s inside the package, so he goes outside to distract himself… but everything reminds him of a possible present. He hurries back inside, and tries to figure out what’s in the package without opening it. He sniffs it, lifts it, and shakes it – but he’s no closer to guessing what’s in there. That night, he keeps the package near him, in case it makes any unusual noises that might give it away. The next morning he has a very good idea – he uses his hands to measure the size of the package, and then goes to Ostrich’s store to see if there’s an empty space on her shelves just about that size. When that doesn’t work he asks his friends if they know what’s inside the package. Yes, they do, they tell him – it’s a surprise he’ll just have to wait to see! Finally, after so much waiting and wondering, it’s Dragon’s birthday. When his friends arrive for the party Dragon eagerly opens the package to discover balloons and birthday hats. Now he knows why it said ‘do not open until your birthday’!

Dragon's New Game: Dragon and Alligator are playing their favourite games – checkers, beanbag toss, a burping contest – each winning some and losing some. They realize it’s no fun winning when your friend is losing, and no fun losing when your friend is winning, so they decide to find a game in which there are no winners or losers. They soon realize every game they think of has a winner and a loser: Arm wrestling... a hopping race... hula hooping... basketball. They try playing games that have winners and losers without doing the part that wins or loses the game – such as playing soccer without kicking the ball – but that isn’t much fun. They play a card game in which the cards have no significance, try tag without an ‘it’ and even play a game of checkers where they can move any piece anywhere at any time… but they realize games aren’t much fun without rules. Dragon decides they’re just going to have to invent their own brand-new game. Inspired, they combine their favourite games together into one strange new concoction and call it Dralligator - a very silly game with an awful lot of silly rules. Dralligator’s so much fun Mailmouse and Beaver happily join in. Best of all – because it has no winner or loser, the game never ends!