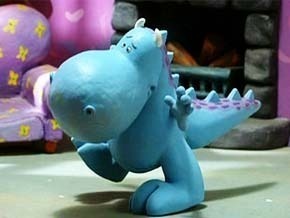 Alligator invites Dragon to his party and tells him everyone has to bring something special. Dragon loves to dance and decides he will come up with a special new dance for Alligator and wow everyone at the party. He'll use moves from each of his friends and put them in his new dance! First, he imitates Cat licking her paws and washing her face, then he goes to Ostrich's store and spies on the way she pecks at cans of peas with her beak Dragon heads for Beaver's house, when he sees Mailmouse adjusting her mailbag from one side to the next, well that's just lovely!. Then, it’s Beaver shaking his head, his hands on his hips, twisting from left to right. Dragon imitates these moves: Perfect! Now he imitates Alligator playing his bongos. He now has one move from each of his friends. At the party, Dragon takes center stage and explains to everyone that he wanted to come up with a new dance for Alligator's party: it incorporates the way all of his friends move. Everyone applauds and Dragon is very pleased. But Alligator notices there's no Dragon move. Mailmouse suggests the Dragon’s wiggling hands move! Everybody dance!