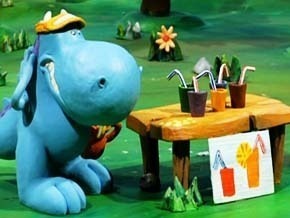 It’s a very hot day and Dragon’s out in his yard, fanning himself. Mailmouse passes by, complaining about the heat and saying how great it would be if someone ran a lemonade stand. Dragon thinks that’s a splendid idea. He’ll help his friends cool off with a nice cold drink of lemonade, and make a little money, too. He decides that while lemonade made with just lemons is nice, Dragon-style lemonade would be much tastier. He adds a little pickle juice. A dash of pepper. Some catsup. Now it’s perfect. Mailmouse, Alligator, Ostrich and Beaver pass by and stop for a glass of Dragon’s lemonade. BLAGHHHHHH. Dragon is conflicted. His stand has been very busy – which is good. And everyone hates his lemonade, which is even better – because that means there’s lots left over for him! But he still wants to help his pals cool off, so he sets up a bunch of arrows… pointing the way from Dragon’s now abandoned stand, leading his friends inside his house to his sink – where Dragon sits, sipping his tasty lemon-pickle-pepper-catsup-ade and pouring his pals free glasses of water.