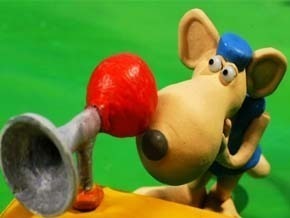 Dragon is admiring his can-opener. He realizes it’s a very clever invention, thought up by an inventor. He starts to think about other inventions. There are oodles and oodles of inventions, invented by oodles and oodles of inventors. Dragon decides it can’t be that hard to invent something – since there are so many inventions around – so he wants to invent something, too. He invents things all right – a new word, a new tail deely bobber, a new smell - but not really stuff the world (or he) needs. Dragon sets out to invent things that will make his friends’ lives better: But it turns out…well…errr… a bit more complicated, at least for a while. Dragon finally succeeds – concocting a brilliant new invention that his friends just can’t get enough of: The Hugging Booth. Whenever they feel the need for a hug, an encouraging word, or just a smile, all they have to do is drop by the Hugging Booth, and Dragon will hurry out of his house and give ‘em what they need. He’s a very clever Dragon.