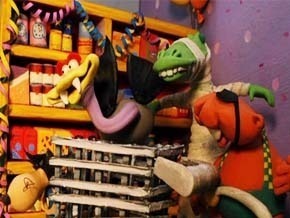 Dragon sets out to make the scariest pumpkin ever, but all the big ones are gone, so he has to make do with five little ones.. Then, Dragon gets an invitation to a costume party, and tries to make a very scary costume. But none of the costumes he owns is very scary, so he wears all three at once. Not very scary, especially when he gets to the party and all his friends recognize him as soon as he walks in the door. But suddenly he gets the host's great big pumpkin stuck on his tail and now he's really scary! Finally, as Dragon heads home he hears a growly noise... Dragon's quite frightened, until he realizes it's his tummy making the racket: he's just hungry. So Dragon goes home and eats and eats until he's as big and round as a pumpkin.