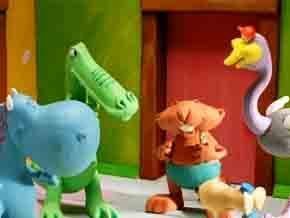 Dragon's Best Friends Club: One Day Dragon and his friends decide to start their own club – and decide Dragon’s house will be the clubhouse. Now that they have a clubhouse, Beaver says they should have a secret password to be allowed into the clubhouse. The others think it’s a great idea – a secret password sounds very important and club-like. They try to come up with the perfect password, "Floop!" "Baboobleboo!" "Glazzeepots!" "Marfledinglebats!" Then Dragon suddenly looks inspired. "Puppy Pickles!" The friends decide that "Puppy Pickles" is a very good secret password. Now that they have a clubhouse and a secret password, Mailmouse suggests they come up with a secret handshake, too. After some brainstorming they come up with a very complicated, very silly handshake that involves rubbing noses and wiggling their feet, and ends with a loud “A-WOOO!” Now that they have a clubhouse, a password and secret handshake, they realize their club still doesn’t have a name. "Guess we could moosh all our names together... yup..." "You mean, like, the Dra-Bea-Mail-Alli-Ostri club?" Then it comes to them: "I think because we're all best friends, we should call it the Best Friends Club." The friends all head off, very excited, and looking forward to their next meeting. The next day the club convenes at the clubhouse, except… everyone’s forgotten the password and the secret handshake gets all mixed up. The friends realize they don’t really need those things because the best part about being in their club is being best friends. Although… having their own song would be good. So they come up with a song – a simple song – one easy to remember.

Dragon's Silly Day: One morning Dragon is having fun making very silly sounds while he brushes his teeth. He suddenly realizes there are special days like Valentine’s Day, Mother’s Day and Father’s Day – but there isn’t a Silly Day. He decides there should be! Dragon tells his friends his idea. They’re all keen to spend the day being silly. Except for Mailmouse, that is… she’s a little shy and not sure she can be silly. Maybe she’ll try later. Meanwhile, Ostrich decides she’ll sing silly songs, Beaver opts to have silly naps, and Alligator dons a tutu so he can do very silly dances. Dragon’s delighted – Silly Day’s turning out to be a great idea. Mailmouse agrees - she’s having a great time watching her friends do funny things. Dragon asks her again if she’d like to try being silly, but Mailmouse says no thanks, she’s got mail to deliver, and heads off. Moments later, Dragon feels Cat playing with his tail – because someone’s tied a ribbon to it. Very sneaky and very silly! Dragon thinks Alligator must have done it, but Alligator insists it wasn’t him. They head off to ask Beaver if he was the one who tied the ribbon to Dragon’s tail – and discover someone’s sneakily tied a bell to Alligator’s tail! Beaver insists it wasn’t him doing those sneakily silly things - it would take too much work. He hops in his hammock – and finds a squeaky toy. The three decide it must be Ostrich doing all these funny sneaky things. Alligator suggests they sneak a whoopie cushion under her chair – but when they get to Ostrich’s store they see Mailmouse making a smiley face out of apples and oranges. They realize it’s Mailmouse who’s been doing all the silly things! She’d been taking part in Silly Day all along, just like her friends… but sneakily. Dragon is very happy. Mailmouse thought she was too shy to be silly, and it turns out she’s the silliest of them all.