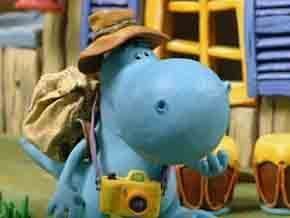 Dragon's Band: One Day Dragon is happily listening to Alligator play his bongos – and decides he’d really like to be able to make music, too. In fact, he wants put together a band to play music with all his friends. Beaver, Ostrich and Mailmouse think that’s a great idea, except… none of them can play any kind of musical instrument. Instrument? Mailmouse explains that musical instruments are things like a guitar, trumpet, or xylophone – and they don’t have any of those! Looking at pictures of instruments, Dragon realizes most music is made by either blowing into something, plink-plinking something, or hitting something. First, he tries to make music by blowing into things. He tries blowing into a book, but it doesn’t sound like music. He tries blowing into a banana and gets no sound at all. Blowing into a pillow just makes feathers fly out. Finally, he creates a nice sound while blowing across the top of juice bottle. He happily shows Ostrich what he’s learned, and Ostrich discovers she can make nice sounds too – using several bottles. It’s decided. Ostrich will be the band’s Bottle-Player. Dragon tries blowing into more things such as a colander and a cookie tin, and then make a wonderful sound by blowing into an empty paper towel tube. It almost sounds like a trumpet! Soon, he and Ostrich are happily tooting away. They aren’t playing the same music – but they are playing together. Next Dragon goes to Beaver’s yard. Beaver likes the idea of making music by plink-plinking (because it seems like less work), and Dragon makes him a wash-tub bass. While Beaver happily plink-plinks away, Dragon accidentally knocks over a bunch of sticks, which make a sound just like a xylophone. Dragon decides Mailmouse can play the sticks. Who knew music was hiding inside all these things, just waiting to come out! Later, Alligator arrives at Dragon’s house to hear Dragon, Beaver, Mailmouse and Ostrich all playing their new ‘instruments.’ Alligator’s very happy they’re making music, and doing it together, but they’re all playing different things! He suggests they try playing an actual song. He leads them into a melody, and soon, they’re all playing the same thing. It’s a very simple tune, but to them, it’s the best song they've ever heard, and they play it over and over.

Tourist Dragon: One Day Dragon sees Mailmouse with a travel magazine. She explains it’s for tourists – folks who like to explore the world and discover things that are the biggest, or the best, or the 'one and only.' Dragon thinks he’d like to be a tourist and do all that, but without having to go too far. He decides to be a tourist in his very own neighbourhood. "I'm sure we have lots of biggest, best and 'one and only's to see right here!" Dragon sets out to explore, and pretends he’s seeing his yard for the very first time. He admires the trees, the flowers, and Cat. Then he pretends he’s never seen Mailmouse before, and notices she has a very big and heavy mailbag – probably the biggest and heaviest mailbag in the world. He’s very happy to have seen something like that. No wonder folks travel!
Next, Dragon explores Beaver’s yard. He admires Beaver’s many inventions – including what started out as a tuck-me-in machine but what really works better as a roll-me-over machine. Dragon is very glad he visited Beaver's place on his tour... he’s very sure he’s just seen the world's only -- and most probably best -- roll-me-over machine!
Dragon then goes to Alligator’s yard, which he finds very interesting. He looks at all the bongos, and the fish in the pond. Then he hears Alligator – and while he goes looking for his friend, his friend goes looking for him. They go around in circles, poking here, searching there – until they finally, accidentally, back into each other. "It was almost like we were playing hide and seek," laughs Alligator. Dragon realizes he’s just seen another exciting thing on his tour – quite probably the best place in the entire world to play hide and seek!Finally, Dragon explores Ostrich’s store – happily taking pictures of all the interesting things on her shelves. He decides that Ostrich is the nicest store owner in the whole world, and hers is the nicest store!Dragon’s very happy. On his tour he learned Mailmouse has the biggest heaviest mailbag... Alligator's is the best place to play hide and seek... Beaver has the one and only roll-me-over machine... And Ostrich is the nicest store owner, with the nicest store, But most of all, “I learned the best, the nicest, the one and only-est part of my neighbourhood, are my friends!”