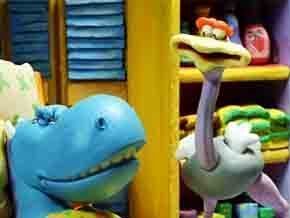 Dragon Loses his Voice: One Day, after practicing his singing a little too much, Dragon loses his voice. It’s not a good time to be voiceless because he needs to ask Beaver to fix his refrigerator, he needs to let Ostrich know he’s run out of bananas, and he wants to ask Alligator to play ‘I Spy.’ When he tries to mime to Beaver that he needs his fridge fixed, he winds up getting a back scratch instead. When he phones Ostrich to ask for more bananas, she thinks he needs help and rushes over to rescue him. Finally, when he tries to ask Alligator to play “I Spy” they accidentally end up playing tag instead… which Dragon decides is better than not playing at all.

Dragon Minds his Manners: One Day when Mailmouse drops by with a lovely cabbage, Dragon happily gobbles it down right there and then burps. Mailmouse decides it’s time Dragon learned some manners. Dragon thinks that’s a lovely idea – although he doesn’t really know what manners are. Mailmouse teaches him to wash his hands before lunch, to eat politely and daintily, and not to burp quite so much. She also teaches him how to hold doors open for others, what to do after a sneeze, and many other useful things. To show off what he’s learned, Dragon invites all his pals over for lunch. He gets a little excited and mixes up a lot of his lessons (for example he thinks he’s supposed to say “Bless you” when Beaver burps)… but his friends are very impressed and now they want to learn proper manners too!