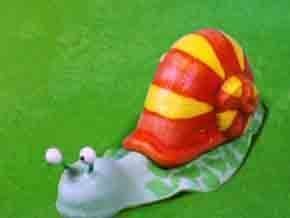 Dragon Fixes Beaver's Toy: One Day Beaver’s just a little grumpy because his Jack-in-the-box is broken and he’s having a hard time fixing it. Jack simply won’t pop up! Beaver asks Dragon to keep an eye on his toy (just in case Jack pops out while he’s gone), while he goes to the store to buy a new screwdriver. Dragon tries turning the crank on the Jack-in-the-box, and Jack doesn’t pop out for him, either. Dragon thinks that might be because there’s nothing to pop out for. Maybe Jack likes it better inside the box! So Dragon decides to make Beaver’s yard more welcoming. He tidies it up, puts out some cookies, and provides a nice place for Jack to sit. This time Dragon turns the crank and FLOINGGGGGG, out pops Jack! Dragon’s very happy that he’s helped, and can’t wait to show Beaver how he’s fixed his toy – except… to show Beaver he’s fixed the toy, he needs Jack to go back in his box, so Jack can pop out again. There’s only one problem… now Jack won’t go back in the box. Dragon worries that maybe he’s made it too nice outside the box – so he puts a cookie inside and gently pushes Jack back in. Then… FLOINGGGGGG – out pops Jack again. Whoops. Dragon takes the box to Alligator – who has a theory. He thinks it’s too crowded inside the box, so Dragon and Alligator decide to make the box bigger. They take the box apart and start to put it back together – but they quickly discover you can’t make a bigger box out of the same small pieces. So the two find some wood, a hammer and nails, and lots and lots of glue. They make a bigger box… and Jack goes back into his box quite happily. They’ve solved Beaver’s problem – although, the box doesn’t look quite so boxy anymore… and now plays a different tune… and falls apart when Jack pops out…Still, Beaver is happy. He likes this new Jack-in-the-box much better!

Dragon's Snail: One Day Dragon is about to drive to the store to buy a nice big heavy watermelon when he notices something at the end of his driveway. A snail! Dragon doesn’t want to risk harming the snail, so he decides to wait and let it cross, first. Except… snails are veryyyy slow. Dragon goes back inside and waits a while, and when he returns, the snail has barely moved. Dragon really needs his car to go shopping for food – there’s almost nothing left in his kitchen – but the snail’s safety comes first. Dragon just has to wait for the snail to cross.
Because he’s hungry, Dragon decides to encourage the snail to go a little faster. He tries cheering it on and waving pompoms. When that doesn’t work, he challenges the snail to a race. (He even gives the snail a head start!) When that doesn’t work, he tries offering the snail a snack – but that mostly just reminds Dragon how hungry he is. Dragon tries gently blowing the snail across the driveway. He makes a little cardboard snail express train and invites the snail to hop aboard. Nothing works. Finally, his tummy loudly grumbling, Dragon apologetically picks up the snail and gently carries it across the driveway. The snail, rather than being upset, is happy! It’s back in the grass, where it belongs! Soon, Dragon is enjoying a yummy slice of watermelon… and the snail has a tasty little piece, too.