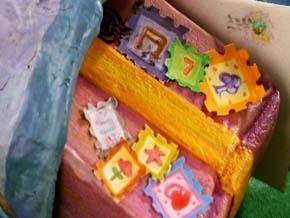 When Dragon comes across a fun and colourful stamp on a letter, he decides he wants to keep it and start collecting more beautiful stamps. The next day, Dragon waits for the mail to arrive so he can collect more stamps, but there’s no mail. He decides to mail letters to all his friends, so they’ll respond in writing and he’ll get more fun and colourful stamps. But, that doesn’t work out as planned. So, he decides to send a letter to himself. Dragon has to get up and do newsworthy things so he’ll have something to write to himself about. Then, he notices a large package in Mailmouse’s mailbag, covered with stamps. That’s it! He will send himself a large package so he’ll get a lot of stamps, all at once! He heads off to the store, buys big jars, and selects the most colourful stamps available. The next day, when the package arrives, Dragon is so eager to see what’s in it he tears all the wrapping paper apart. Now all the stamps are ruined, but that doesn’t matter. Dragon decides he’ll start a jar collection instead!