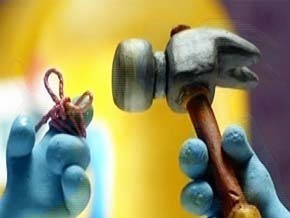 Dragon wants to use his stepladder to look for his badminton racket, but one of its legs is very wobbly. He goes to Beaver’s house and asks if he can borrow his hammer. In order to make sure he’ll remember to return it, Dragon ties a piece of string around his finger so when he looks at the string, it will remind him to return the hammer. He decides to write himself a note, reminding himself to look at the string tied around his finger. Then, he gets out paper and draws a picture of an arrow and hangs it on the wall pointing toward the note. Dragon finally feels confident that he’ll remember to return the hammer. He lies on the couch and falls asleep. When he wakes up from his nap, something catches his eyes. He follows his little signs and suddenly, he remembers! He’s supposed to return the hammer to Beaver, and so, that’s what he does. He gets back home and realizes that he may not be so good at remembering things after all because he forgot… to fix the stepladder