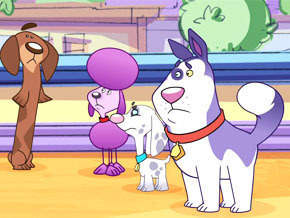 Dogs with Jobs
After watching a Dalmatian fire dog ride by on a fire truck, an excited Lucas decides he wants a job too. He figures there must be other jobs he can do. Dogs do lots of jobs! He proceeds to try out different jobs, but none of them work out. He decides to be guide dog, a guard dog, a herding dog and a sniffer dog, all with less than wonderful results. In fact, the others start to get pretty cranky as he tries out his jobs. Finally Suki and Koda hit on the perfect job for Lucas, Games master as he loves to play and also thinks up great games.
Theme: Everyone is good at something

Visit to the Vet
Lucas hurts his foot while playing but refuses to tell Rosie because he doesn’t want to go to the vet. The others, especially Pedro, tell him that there is nothing to worry about - going to the vet is no problem. They play make believe game and pretend they’re going to the vet so he’ll see its okay. Koda is the vet and Lucas is the patient. They use the tree house as the vet’s office and play act going to the vet. Lucas is finally convinced! Just as they are about to go Pedro trips and now he has to go to the vet too. Only it turns out he was kidding about not being scared. Now Lucas calms him down and they all go off to the vet.
Theme: Trying new things and overcoming the fear of them

Pedro's Faux Pas
When Pedro hurts his paw everyone takes good care of him. He enjoys the attention so much he doesn’t tell the others when his foot starts feeling better and lets them continue to wait on him hand and foot. Finally they figure out that he’s just pretending his paw still hurt. He repays their kindness by waiting on them.
Theme: It’s not nice to fool your friends

The Misunderstanding
Suki overhears Lili speak say she won’t go out with that brown old thing, and she thinks she’s talking about her. Finally she learns that Lili was talking about her new raincoat for dogs that her owner bought for her, which she thinks is atrocious! Lili can’t believe Suki thought she was talking about HER! Suki feels better and they all head out happily to the park.
Theme: Sometimes what we overhear is not about us