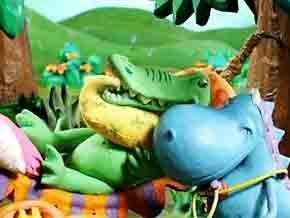 Doctor Dragon: One Day Dragon notices that Alligator has the sniffles. Because he’d just been reading about doctors, Dragon offers to take care of Alligator. He looks in his ears, taps his knees, listens to his chest and then gives him a lollipop – just like a real doctor would. Alligator’s very happy, and Dragon decides he likes being a doctor. Dragon takes Alligator home and tucks him into bed. Then Ostrich calls. She has the sniffles and wants Doctor Dragon to take care of her, too. Dragon does his ‘examination’ and gives Ostrich a lollipop, and then makes sure she’s comfy. Then Alligator calls – wanting more attention. After taking care of Alligator, Beaver calls for Doctor Dragon, wanting some attention, and a lollipop of his own. Soon, Dragon is scurrying from Alligator to Ostrich to Beaver and getting confused. Mailmouse very wisely suggests that instead of rushing from place to place, he should gather all his sniffly friends in one spot. And then, once everyone’s at Dragon’s, Mailmouse realizes that Dragon’s all worn out and now he’s got the sniffles. Dragon enjoys some attention from Mailmouse but mostly… he wants a lollipop, too.

Dragon's Tire: One Day Dragon’s helping Mailmouse and Beaver tidy up Beaver’s yard. When an old tire slips off a pile of sticks and bounces away, Dragon hurries after it. He’s delighted to find out how much fun an old tire can be, and Beaver’s delighted to let Dragon use it as a toy until he can figure out to do with it. After happily rolling the tire around the neighbourhood a while, Dragon shows it to Alligator. Alligator realizes the tire would make a great ‘bouncy thing,’ and the two bounce around on the bouncy thing until they’re tuckered out (and then discover a tire makes a nice soft thing to rest on!) Later, Dragon uses the tire as a swing… a drum… and a soccer goal. Finally, he returns the tire to Beaver’s yard and discovers it make a perfect holder for Beaver’s various sticks.