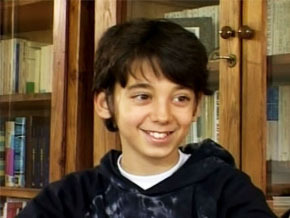 Deniz’s favorite art form is traditional shadow puppets. They call Turkish puppetry Karagoz, the name of a famous puppet character. Between games of backgammon and bicycles rides with his father, social games with his neighbor and games of soccer with his cousin; Deniz doesn’t have a lot of time for his puppets but he wants to put all of his heart into his art. To give him ideas, his parents have taken him to a puppet show. To the rhythm of tambourines and Oriental songs, Karagoz, the mocking and shameless puppet makes his entry. Deniz learns the ropes of a good puppet show. Thanks to his mother, he masters all the stages of making a puppet. The big day has arrived. All of Deniz's family is gathered at his grandmother’s house to see the show. Now it’s his turn to move the puppets!