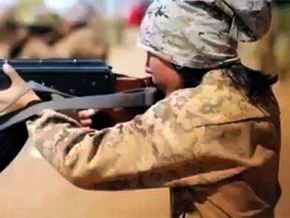 Each of the Islamic State's terrifying actions is accompanied by carefully staged videos whose purpose is horrifying the Western audiences on the evening news and inflaming the Muslim ones. Before being a war machine, ISIS was a huge machine of propaganda employing over 100 Western technicians, with 40 broadcasters and professional production companies. But what lands on our screens is only a tiny part of the hundreds of clips uploaded daily. For two years, 7 experts with different skills, such as military strategy, finance and IT scanned the maze of the Net and monitored over 5000 social network accounts of ISIS supporters worldwide, downloaded hours of content and analyzed it.

Did ISIS invent a new “format”? Not at all. Its deadly “show schedule” is made of communication codes, rules and formats already invented and tested by its bitter enemy: the West. “DECODING ISIS” is the result of that work. And what it reveals is an organization that is as media savvy as it is bloodthirsty.