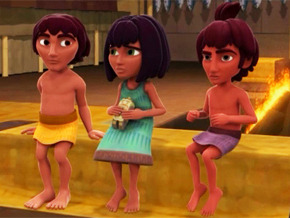 Raven overhears Frog talking about the trickster Coyote and decides to head south to find him. Coyote asks Raven to teach him to fly, so Raven suggests he grab Coyote’s nose and carry him high into the air. Coyote squirms in pain and his nose begins to stretch. Raven warns him to stop, but Coyote wriggles free, falling so quickly his tail catches fire and he hits the ground in a puff of dust. Coyote's red skin is now covered in dust, his nose is long with holes from Raven's talons and his tail has a black singe mark at the end. Raven laughs, but in fact, Coyote wanted to change his appearance because the creatures of the desert have come to know his old form, so he tricked Raven into transforming him!