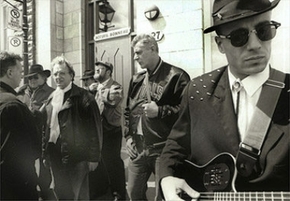 For more than 125 years, meals have been served for a large number of homeless people in the reception center of L'Accueil Bonneau in Montreal, Canada.

A few years ago, a choir of around twenty men was formed from the regular clientele of the center. Initially, the choir sang mainly on the streets and subways, just to make a little money. Once it was noticed by the media, the choir was invited more often to perform at special occasions, even making a trip to Paris.

Directed by Magnus Isacsson, the film focuses on the mutual relationships between the singers and their love-hate relationship with founder and choirmaster.

With endless patience and a number of strict rules, the choirmaster tries to keep ''his men'' in line, at times withholding well-earned money to prevent them from skipping rehearsals or spending it on beer.

Nevertheless, it is clear that this group of homeless men make up a heterogeneous community to whom music is vital for survival.