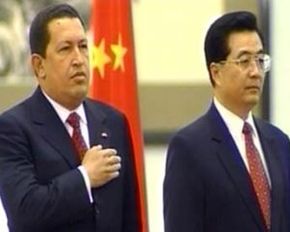 China Versus the United States: the Battle for Oil

It's the end of a myth which lasted 3 000 years. Since its oil shortage, China has relied on the outside world. Energy is its weak spot, its Achilles' heel, and the problem will become more pronounced in proportion to its unbridled economic growth.

For 3 years, Chinese authorities have been travelling more and more to secure oil contracts and concessions, incessantly butting heads with the U.S. Contracts have been signed with Venezuela, Iran, the Sudan and Angola. In exchange, China offers its support. It also protects some partner nations by threatening to use its UN veto against resolutions involving human rights (Darfour) or nuclear issues (Iran).

American oil companies are voicing their growing alarm that they may be unable to compete with deep-pocketed state-owned Chinese oil companies.