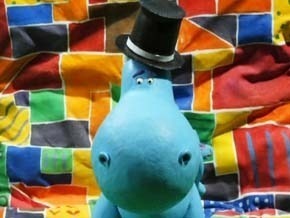 One morning Dragon starts to sing a little improvised tune about his furry pal. He is so pleased with his silly Cat song, he decides he should put on a show for his friends, and perform all sorts of new silly songs. First, Dragon makes some signs featuring a drawing of Dragon singing and then puts his signs up – on trees, on fences, outside Ostrich’s store. Dragon then builds a stage, and a ticket booth. He’s all set to put on his show… now all he needs are some silly new songs. Then it occurs to him that he’s going to have to make up these silly new songs! He gets his inspiration from his sofa, and his nose, and makes up new tunes. All his pals came for his big show. Dragon, up on his stage, opens his mouth, but then he is so nervous he can’t remember the lyrics of his songs! Dragon then looks at his pals, and launches into a silly made-up song about them! His pals love it – so Dragon sings it again, this time with his friends joining in. Dragon’s silly new song is a hit, and so is his show.