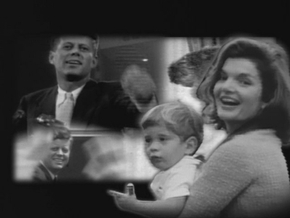 Why Jackie? Hasn't everything been said about her? Yes and no. Patrick Jeudy wanted to go beyond the classic portrait, to take Jackie's point of view and discover ''what Jackie knew''...

If anything, Jackie was a ''modern'' woman - a woman who expressed her opinion and imposed her views - just as Jack was a modern man in the sense that he made unrestricted use of the attraction his power afforded him.

Through Jackie's eyes, the film offers a vision of "the modern couple" and the different attitude of a man and woman when it comes to sexuality and power.

Jackie was never just the ''woman at his side''. She imposed her own style; she changed not only the image of the First Lady, but the image the world had of the American Woman. With Jackie, the busty Hollywood blonde went out of fashion. If truth be told, she could have been rivalled only by Eleanor Roosevelt or Hilary Clinton.