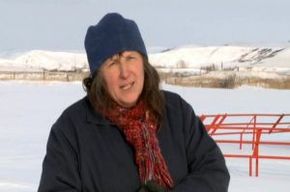 Burning Water is an intimate and complex human story of how people respond to a crisis they didn’t start.

In the Rosebud River valley, an hour east of Calgary, the water in many homes can be lit on fire. Everyone agrees there's gas in the water. Few agree on why.

At Fiona Lauridsen's farm, just outside the hamlet of Rosebud, showering has become a dangerous activity. Fiona and her family developed skin burns from simply taking a shower and Fiona claims that EnCana, Canada's largest natural gas company is responsible.

She claims that EnCana has contaminated the aquifer by drilling (fracking) for coal bed methane, a new source of natural gas extraction that often uses chemicals for drilling. Yet in the hamlet, where the Rosebud Theatre is a popular tourist attraction and graciously sponsored by EnCana, most residents refuse to even talk about burning water, for fear of harming the tourist industry.

A government minister blamed the contamination on improper well maintenance on the part of the farmer. Other scientist’s disagree, and Fiona thinks the government is deflecting attention away from the negative consequences of an energy boom that’s bringing record profits to the province.

As gas wells sprout up across North America, and all around Rosebud, the Lauridsen family struggles to stay together and remain part of their community, at the same time confronting the dark truth of what may be happening beneath the surface.